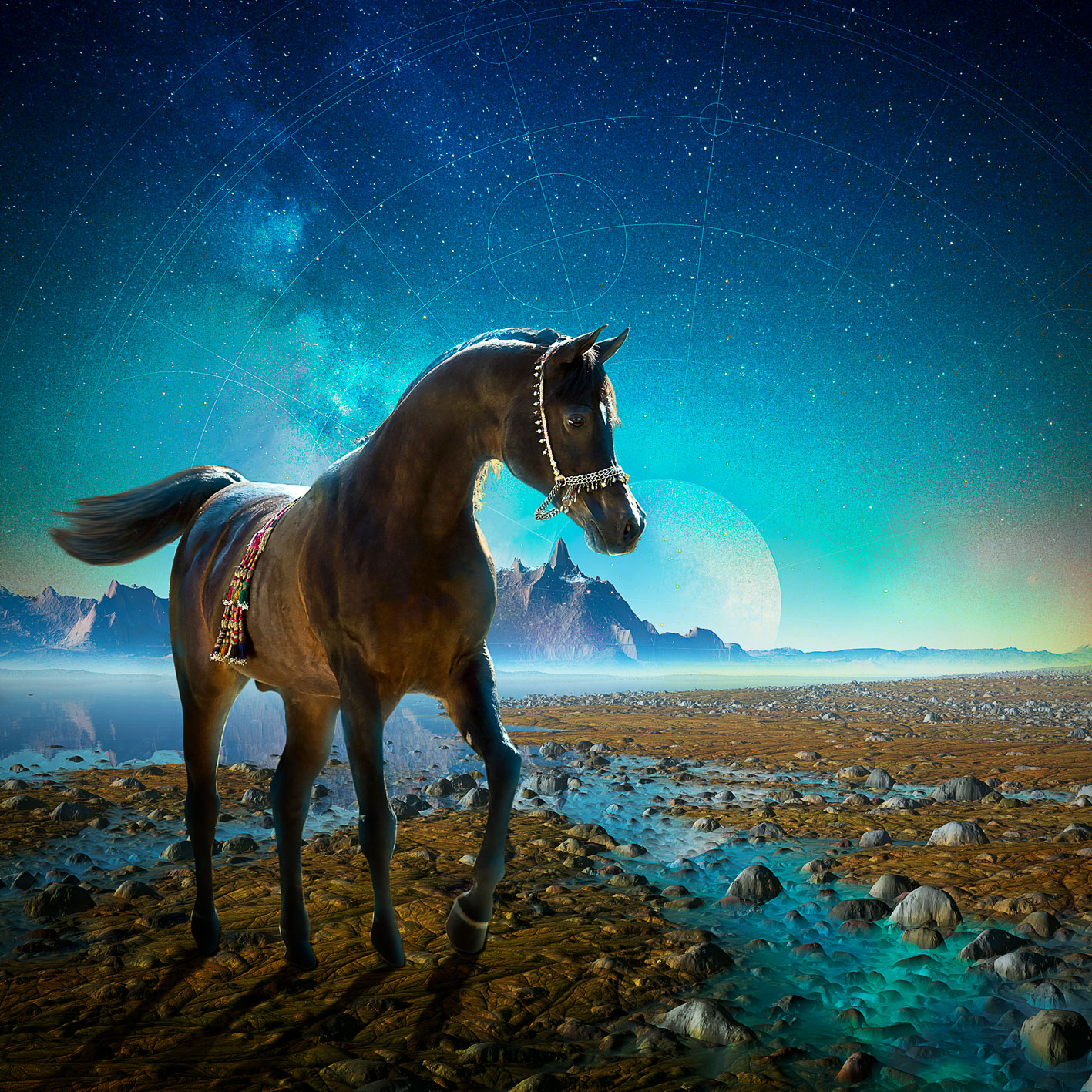 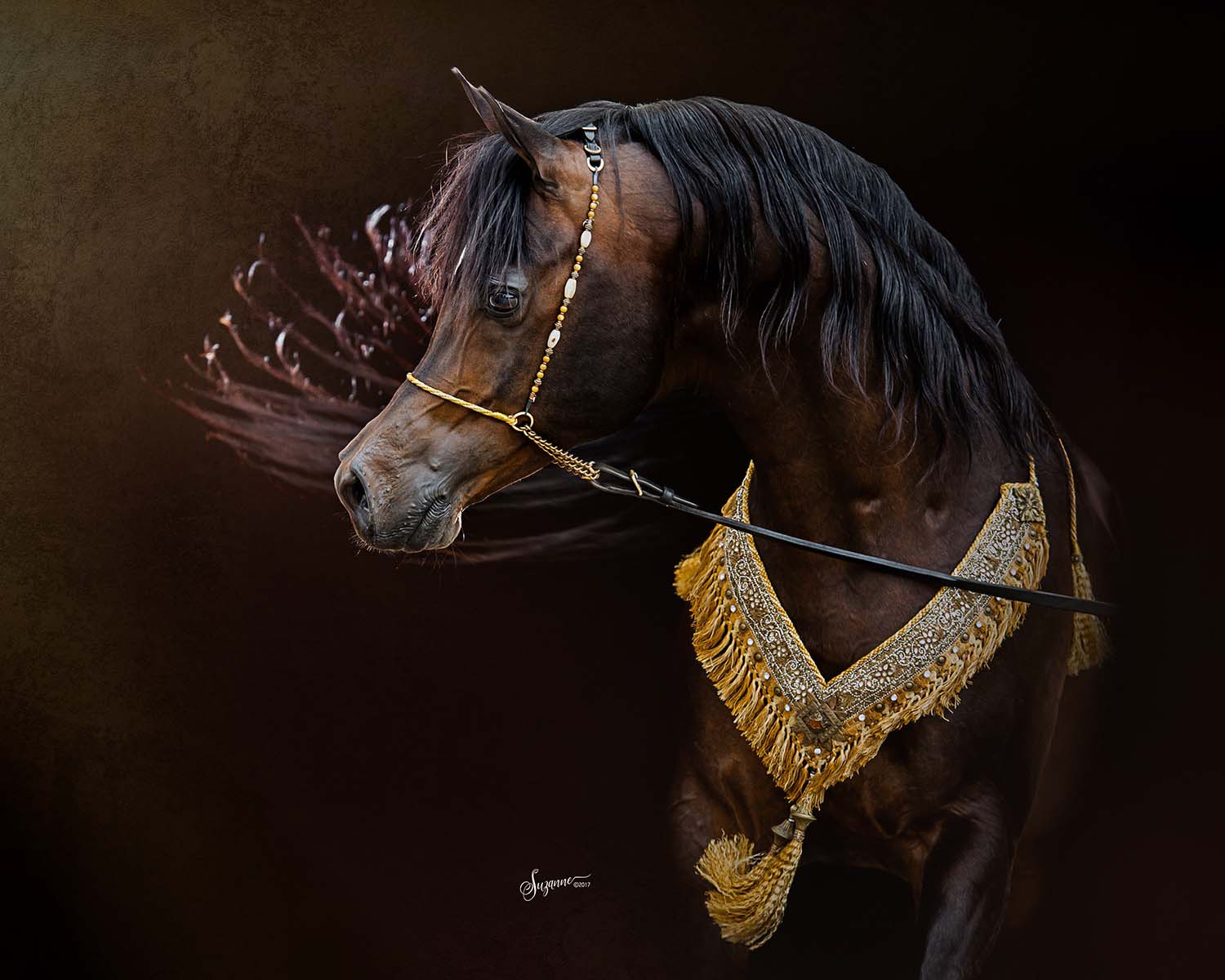 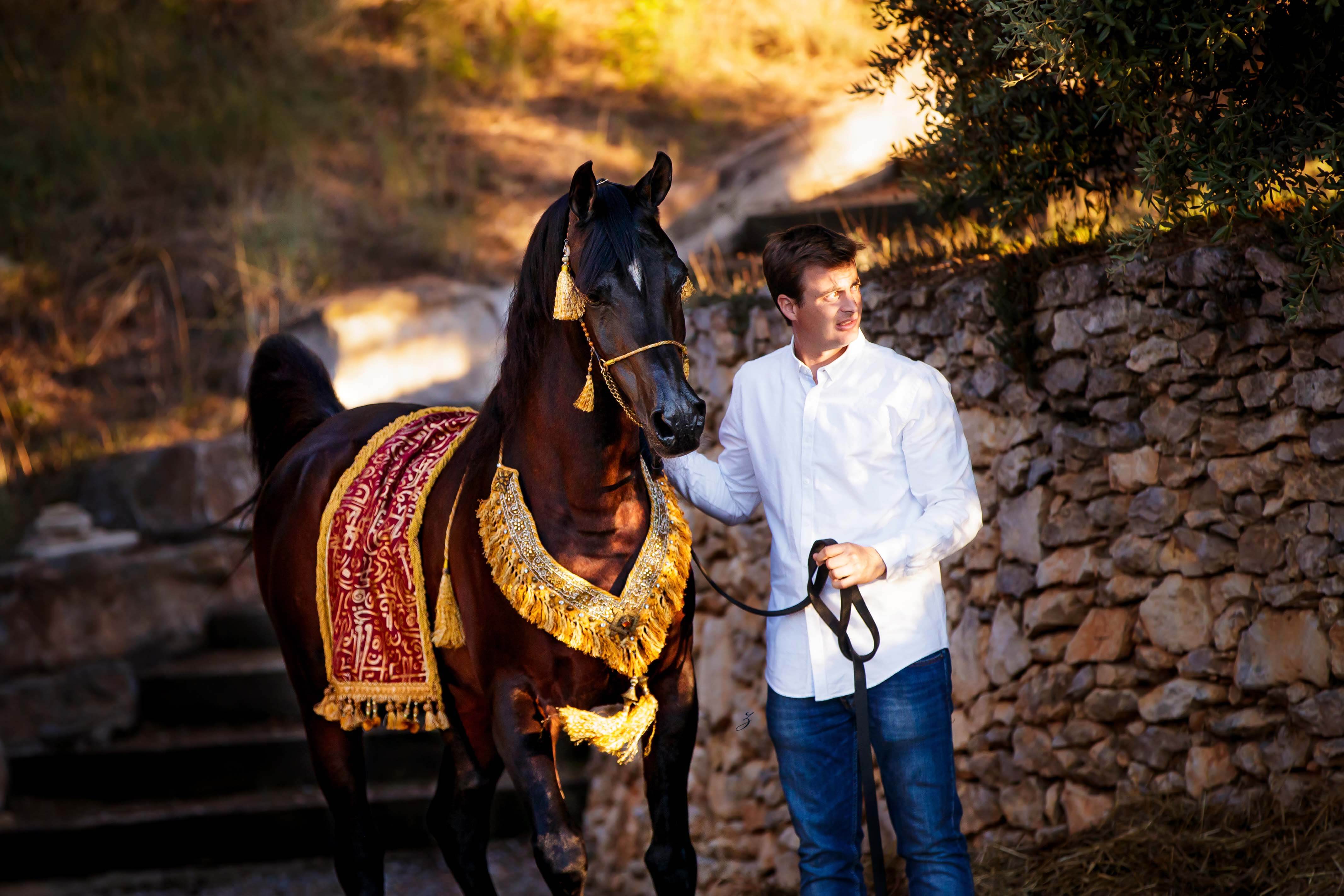 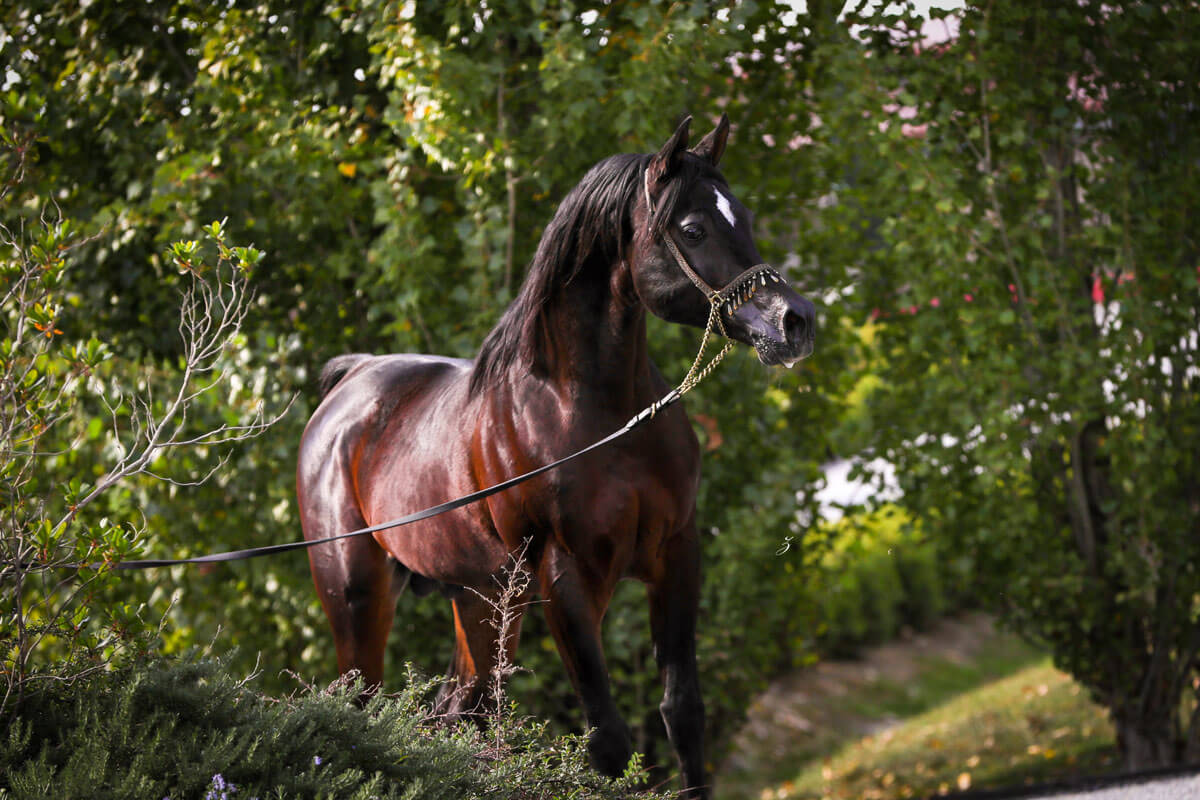 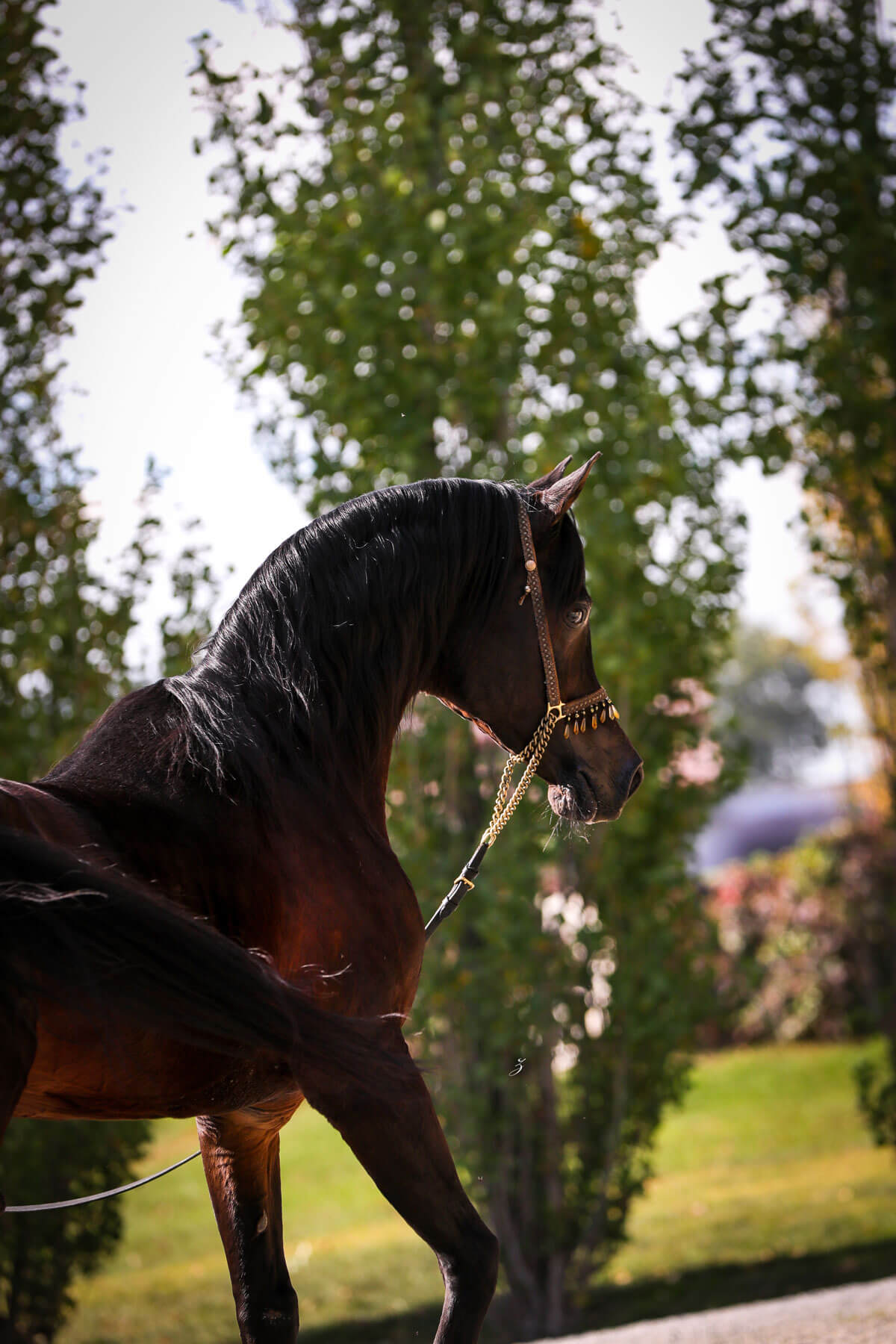 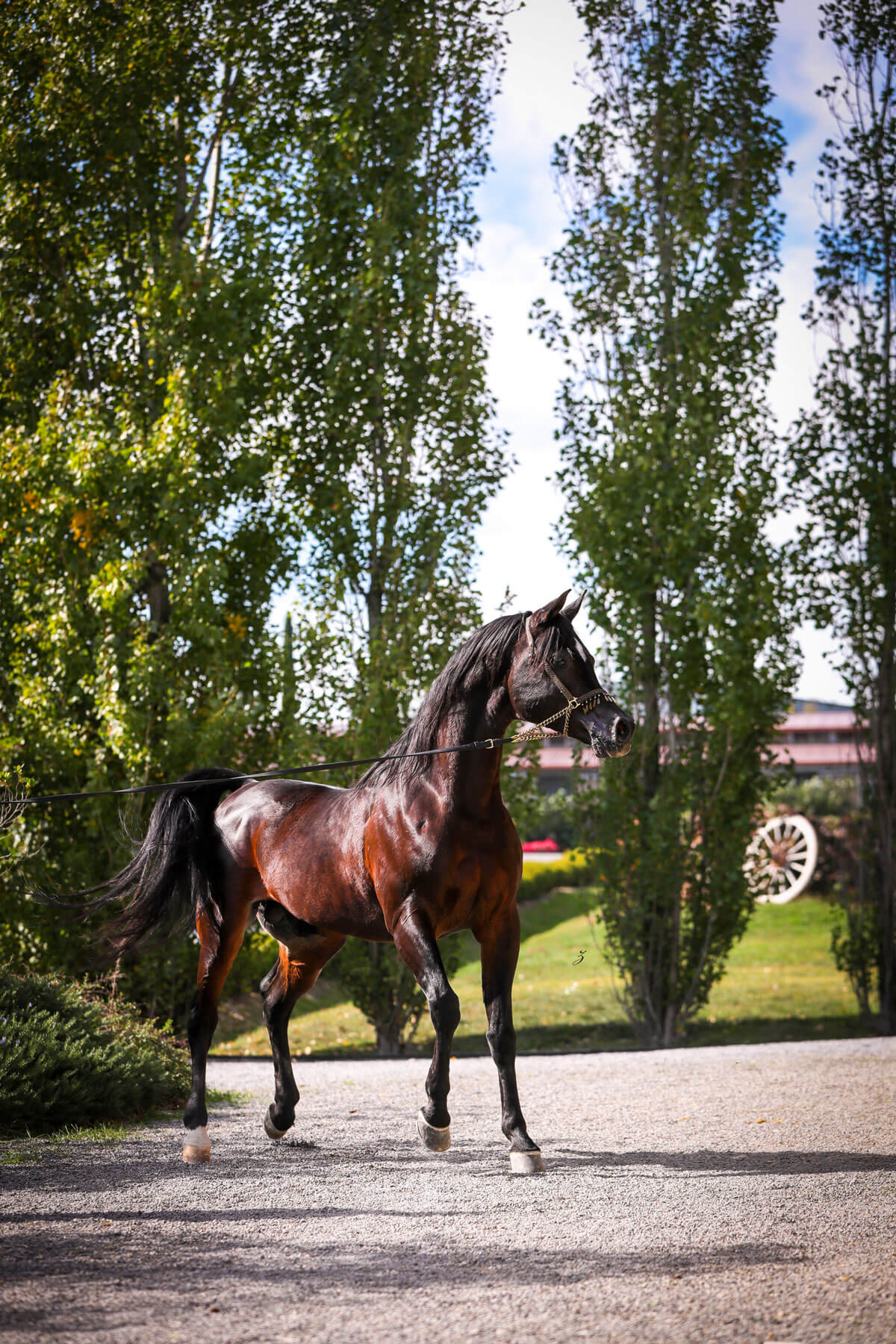 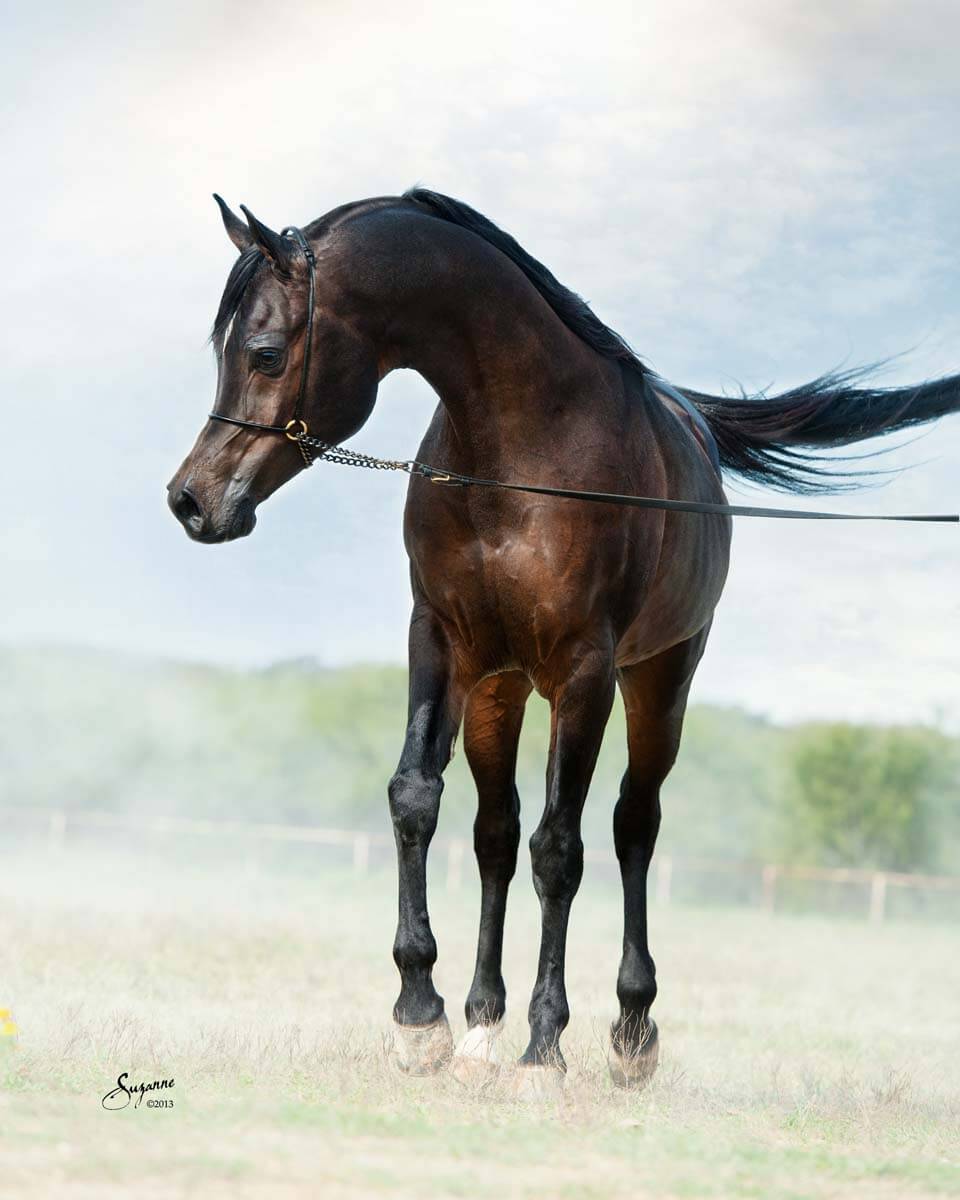 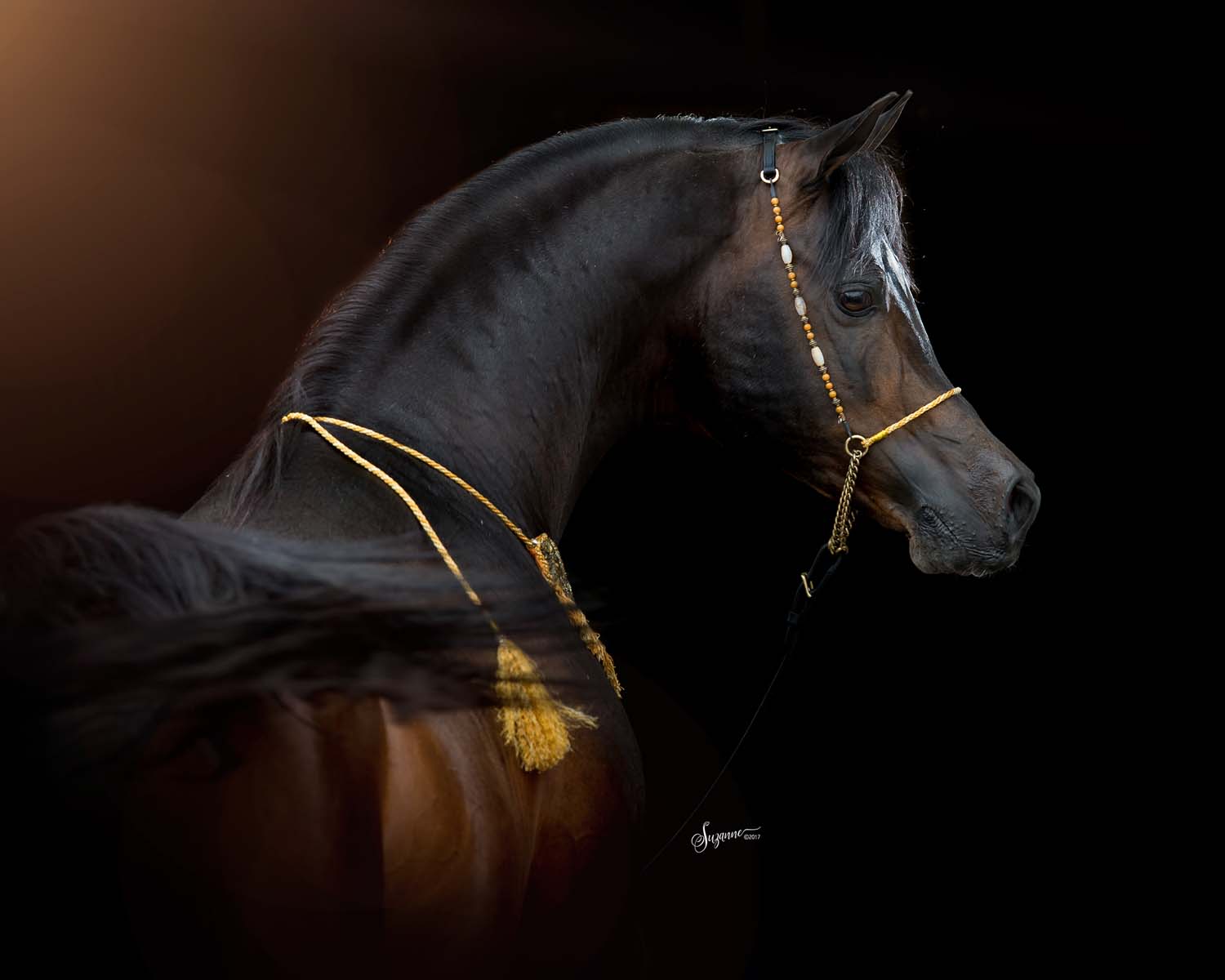 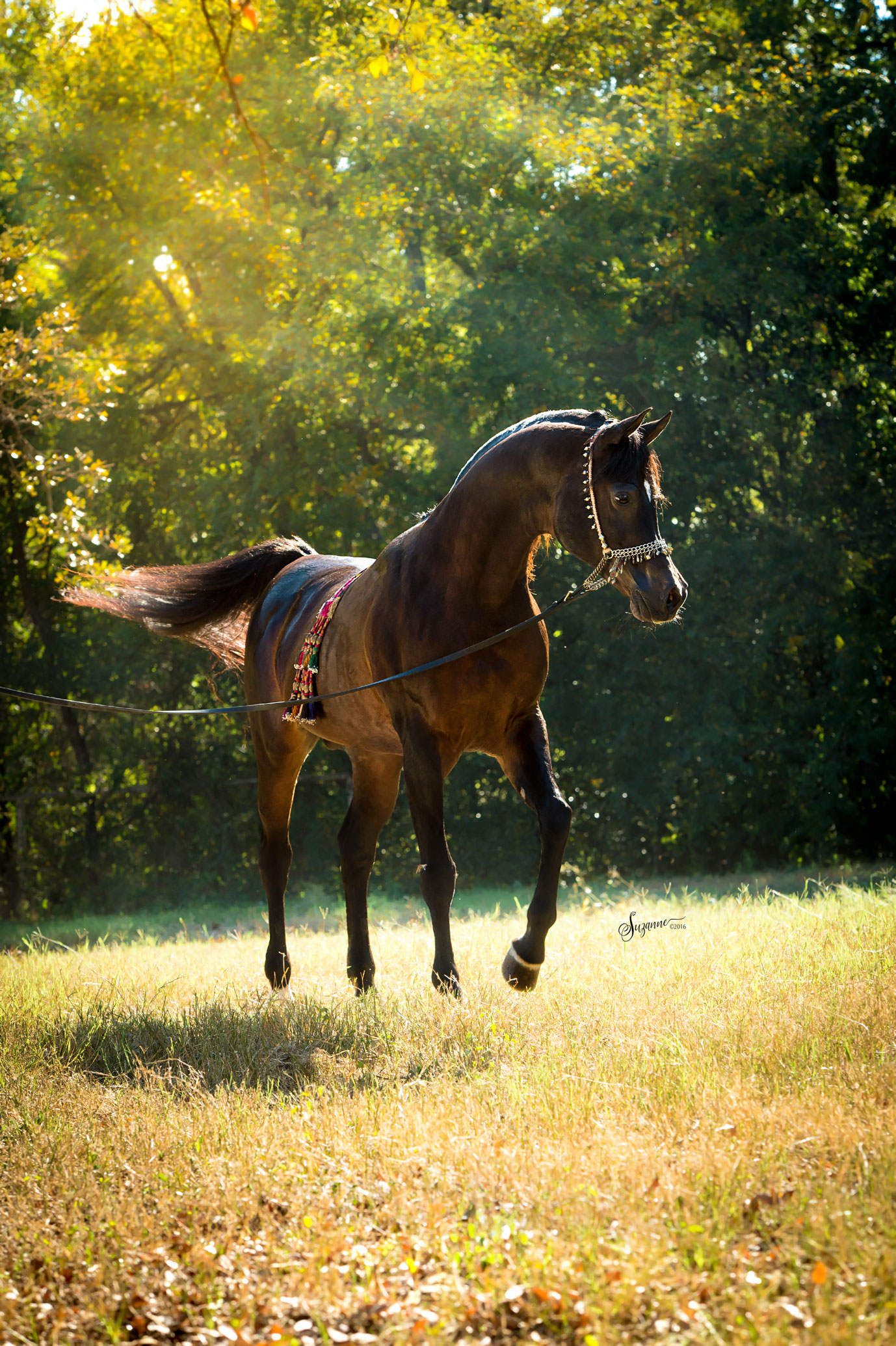 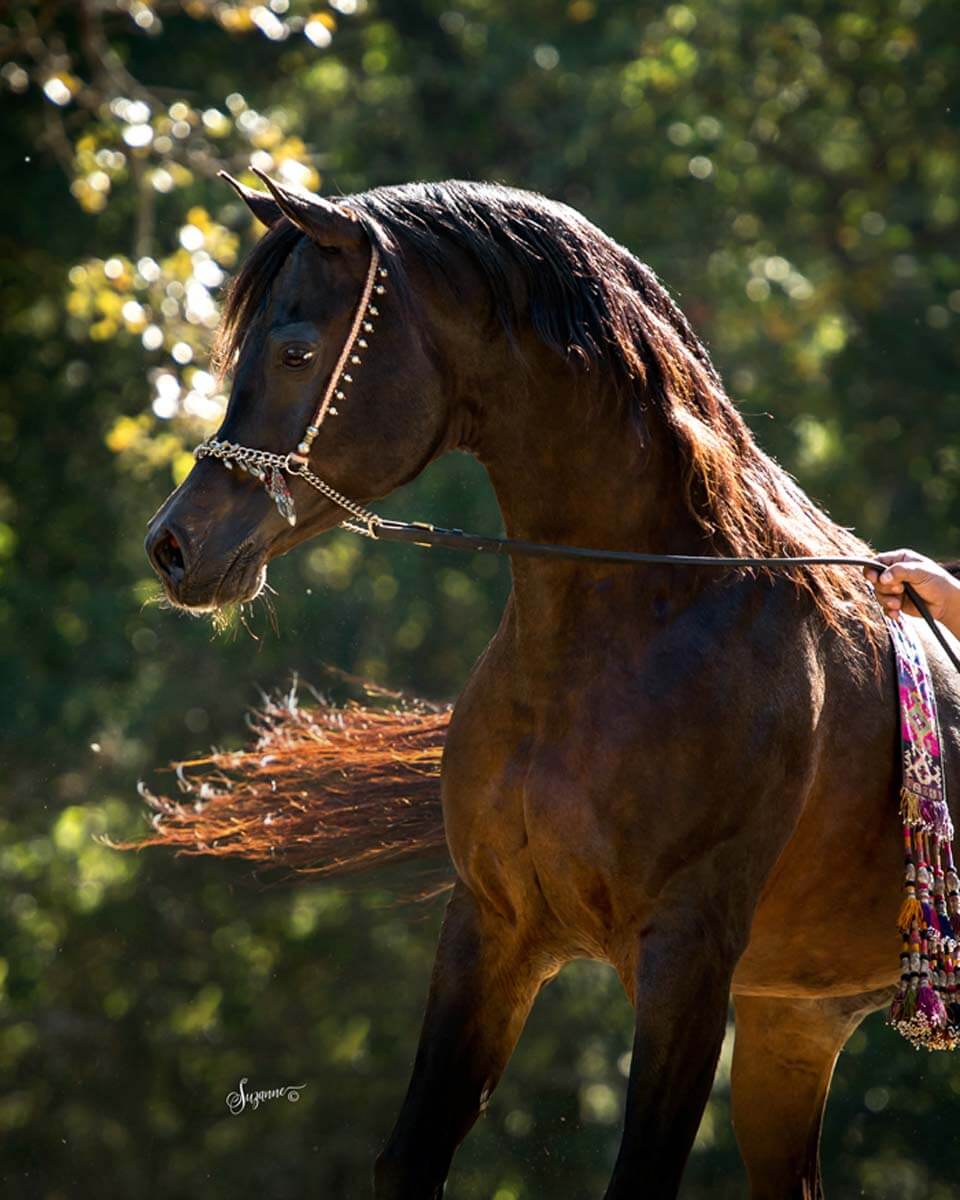 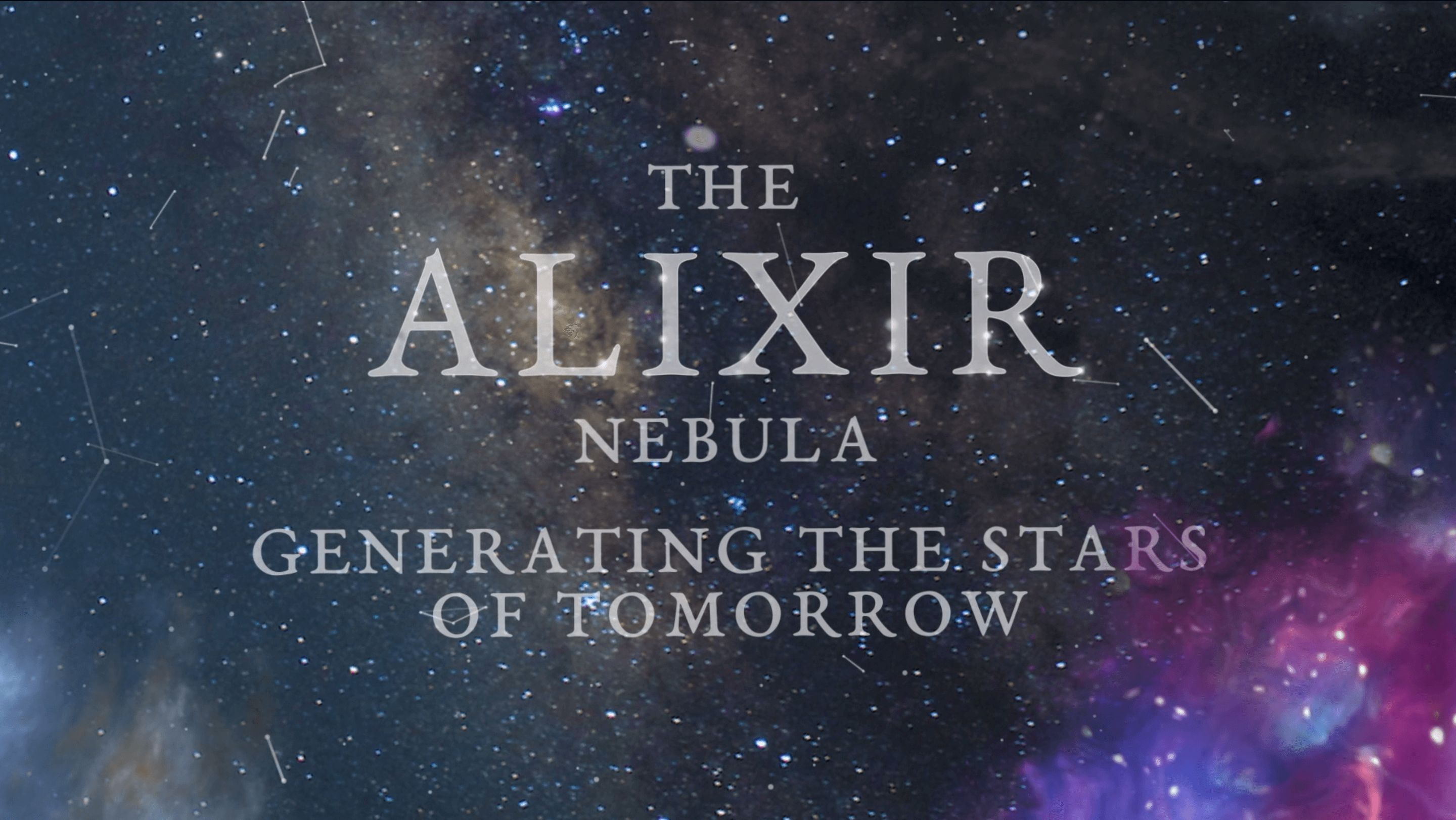 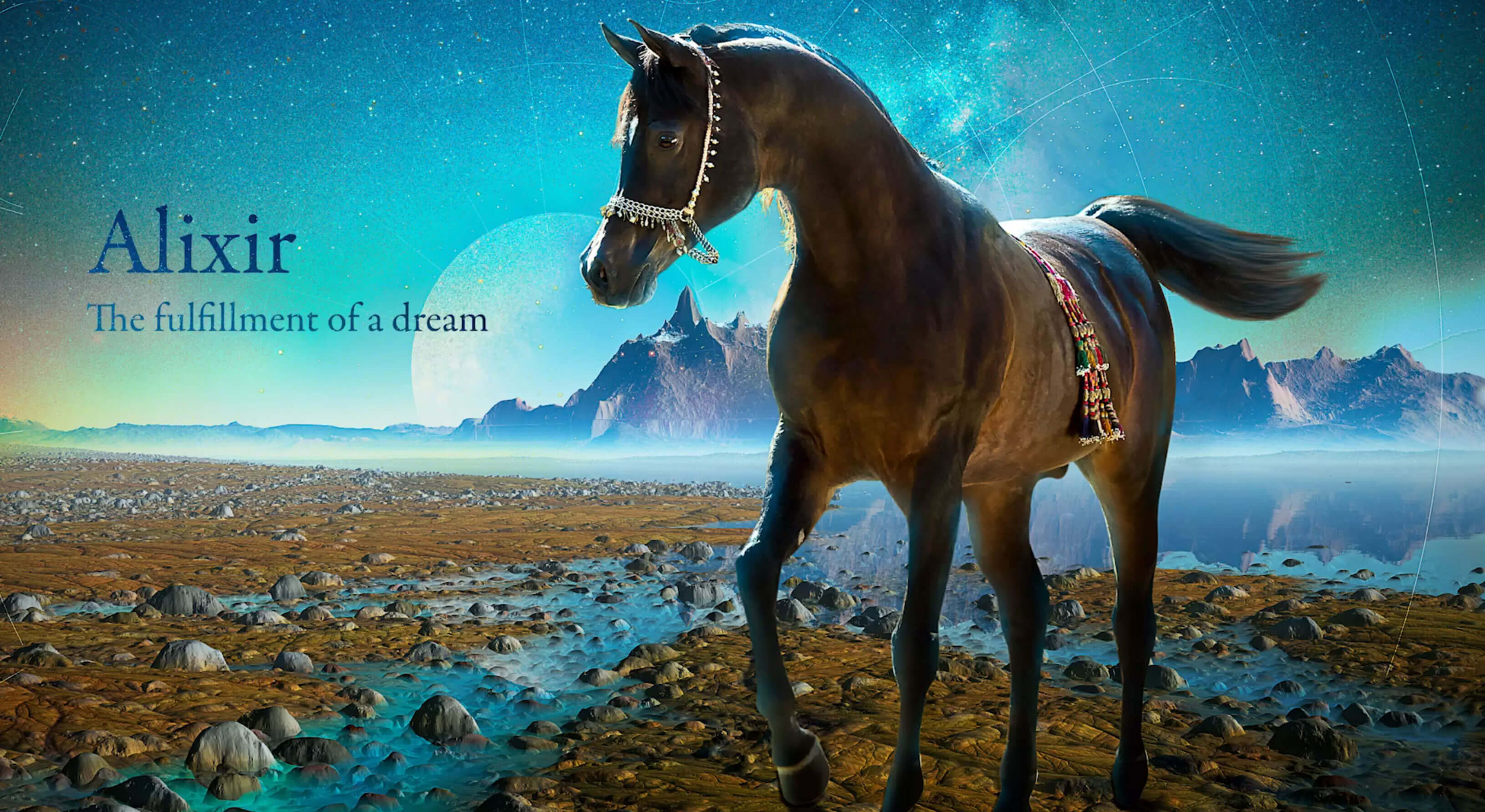 Across the heavens, the dynamic cloud of a nebula is a fertile breeding ground for new stars, which explode to life at 1 million degrees Celsius. Although born of the same creating cosmos, the new stars vary in their luminosity—the power at which they emit energy. At Al Jood Stud, it is the head sire Alixir whose progeny are exploding with quality, carrying his stamp in combination with a variety of female lines.

The “Alixir Nebula” is producing a stable of future stars for owner Mohamed Jaidah and breeders worldwide. Bred by James and Judy Sirbasku at Arabians Ltd. in Texas, Alixir is a straight Egyptian son of The Elixir and is out of The Prevue, a daughter of The Minstril. Alixir was never on the market; but when Judy recognized Jaidah’s true love for the stallion, she agreed to let him purchase his dream horse. Alixir embodies all the qualities that Jaidah holds in such high esteem: a smooth, balanced body; long, elegant neck; strong, straight legs; a small, chiseled head; and an abundance of electric presence.

After spending his first 19 years in the United States, Alixir is now standing at stud at Tolra Training Center near Barcelona, Spain; to the delight of breeders who are eager to see him in real life and use him with their mares. In sync with his European unveiling, Al Jood Stud has been promoting Alixir through his progeny in show rings around the world.

Among the most precious of the Al Jood Stud Alixir daughters is Malak Al Jood, whose dam is the magnificent Miss Maggie Mae, by The Minstril. Foaled in 2015, Malak is the result of Mohamed Jaidah’s astute purchase of one of the last three embryo rights available from Miss Maggie Mae, which he used with Alixir. Currently she is ready to become a matriarch mare for a friend of the Al Jood Stud breeding program in Qatar, we are closely following her future production as she is bound to make her mark.

In 2016 Alixir went on to produce Farah Al Jood, a straight Egyptian daughter out of Fariha Magidaa. Fariha being a daughter of Shahir IASB by Salaa El Dine and out of Imperial IM Phayana. Fariha’s dam line through AK Fariha sired by IBN Morafic and out of Gasaara. This young filly was found by a local US breeder in Texas whom loved her and wanted to acquire her for his straight Egyptian breeding program where she continues to be a valuable asset within their breeding vision.

Alixir is distinguishing himself as a sire of exceptional broodmares, as evidenced by the many champions produced by his daughters. A perfect example is RSL Faith, the dam of Al Jood homebred Maraam Al Jood, the 2018 U.S. Egyptian Event Silver Champion Straight Egyptian Junior Mare. It was a wonderful follow-up to Maraam’s previous show appearances in Lexington, KY and the Regional shows in which she acquired multiple Champion titles throughout her show career. RSL Faith comes by her pre-potent blood naturally: She is a full sister to the powerhouse trio of brothers Qaysar Al Jood, Bellagio RCA, and Mirajh RCA among others of the same cross. They are all children of the incredible Thee Desperado mare, Rhapsody in Black.

Mohamed Jaidah always looked forward to the foals that will be produced from crossing Alixir to his non-straight Egyptian mares as well. It is an opportunity for him to not only practice his breeding philosophy of opening up pedigrees to build a better platform for future generations but also to generate the next superstar in the “Alixir Nebula.”
The first foals from this vision have arrived in 2020 when Al Jood produced Alicia Al Jood and Elan Al Jood.

Alicia Al Jood is an exciting filly, the result of a collaboration with the Arabian Stud Europe in the Netherlands, whom allowed us to use Alixir on their beautiful Geraldyne El Jamaal. Geraldyne is a young and rare direct daughter of Ali Jamaal and out of the elegant Gai Natasha, a Bey Shah daughter out of Gai Radiance. Alicia brings together as we hoped all the qualities of this remarkable and unique pedigree, she’s tall, super legs and fluid motion, a lot of elegance and refinement, that long tail bone and beautiful carriage. A young filly which we hope finds her place amongst the future of the Al Jood breeding mares.

Very closely after Elan Al Jood was born, a colt sired by no other than out beloved Elle Marin. A mare bred by Markelle Arabians and acquired by the Al Jood Stud as a young filly. Marin is sired by the exotic Ajman Monicione out of Markelle’s most influential mares Allamara MA, a daughter by Three-time World Champion Marwan Al Shaqab and out of RA Miss Siagon by Exceladdinn. Elan showed all the qualities of his pedigree as soon as he appeared, very showy with a superb body, great movement, very refines and exuding overall quality. A local breeder in Spain noticed him at Tolra Training Center and acquired him at just a few months of age to be part of a breeding, halter and riding Arabian program.

Beyond being a producer of superb breeding mares, Alixir has proven to produce over and over again stallions of the highest quality.

In early 2013, Rhapsody in Black produced an impressive colt—Qaysar Al Jood had arrived. Mohamed Jaidah considers Qaysar to be the embodiment of what Alixir can produce. He is a gorgeous young stallion who bears the bay color of his father and the phenotype of his exquisite black mother, a next step in the evolution of his pedigree. Qaysar was shown in Europe and acquired several Champion titles, named Top 5 at the Straight Egyptian World Championships in 2018, followed by multiple Silver Champion and Best Straight Egyptian of the Show titles throughout his career. In 2020 Qaysar was acquired by Al Saleem Arabians in Pakistan to establish the Arabian breed within the country and start to create a foundation for the Arabian horse amongst local breeders. The Al Jood Stud retains his remarkable pedigree through his 2019 born daughter Qamar Al Jood, a maternal sister to Alicia Al Jood.

Arslan Al Jood is another superb example of the great breeding capabilities of Alixir. A 2019 born straight Egyptian colt out of Al Ilah Bint Halim Shah I-I, the result of another great collaboration with private Italian breeder. A heavily Ibn Galal line-bred mare sired by the great Emiratus B and out of the classic 28 Halim Shah I. Arslan shows however so much of the incredible attributes of this remarkable pedigree, large black eyes accompanied by classic Egyptian type, an impeccable body supported by great legs and athleticism, nice upright shoulder and overall balance. A colt that should have great potential as a future outcross breeding stallion for the modern Arabian horse and pedigrees in both purebred and straight Egyptian lineages.

And then came along, Alixir’s latest addition bred by the Al Jood program. Yet another extremely successful collaboration, this time with Belgian breeder Glenn Jacobs. Whom allowed us to use his beloved mare Hadiya Al Shahania to produce with Alixir a remarkable colt named Aladeed Al Jood, a very exciting youngster with several crosses tracing back to the all-time great Ruminaja Ali. Hadiya is sired by the World Champion Al Adeed Al Shaqab by Ansata Halim Shah out of Sundar Alisayyah. Whilst Hadiya’s dam is no other than Johara Al Naif, a truly classical Egyptian mare by Ansata Shalim and out of Al Johara by Prince FA Moniet.

We excitingly await to see this young boy develop further as we see the potential in him as an Heir of the Alixir Nebula and his future in the Al Jood breeding program.